We thought we would feature the videos as riders from Northern Ireland often take the short trip to Scotland for a tour around and indeed they might help in Northern Ireland where the scenery and riding views are just as breathtaking and sensational.

The campaign is highlighting the top risk areas for riders, in a bid to help reduce fatalities on Scotland’s roads. Its focus is on Scottish riders and those visitors from beyond Scotland’s borders.

We first picked up this new campaign on Social Media through what are described as two “the incredible films”. The films capture the thrill of riding in Scotland and showcase coastal rides, scenic forest roads with an epic mountain journey to follow and carry the poignant message – “Be aware on breath-taking roads. Don’t let them take your breath away for good.”

Minister for Transport Humza Yousaf said: “As a biker myself, I love the thrill of riding on Scotland’s breath-taking roads but, as Transport Minister, I am also acutely aware that motorcyclists make up less than one per cent of Scotland’s traffic, but account for 20 per cent of fatalities.”

“No matter what your level of experience is, this campaign will remind us as bikers of the importance of staying safe and riding appropriately. We hope the biking community from across our country and beyond will enjoy and engage with the helpful tips to ride these roads safely.”

Inspector Ian Paul, who leads Police Scotland’s national motorcycle unit said: “At this time of year many bikers are planning weekend ride outs and trips with their friends, to enjoy the magnificent scenery Scotland has to offer.

“We understand the thrill of motorcycling and why people want to do it, but we also want bikers to keep themselves safe especially when overtaking, approaching junctions and negotiating bends.

“This campaign encourages the biking community to enjoy Scotland’s roads, while following best practice too.” 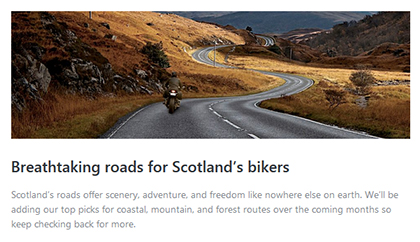 Outdoor posters will also be used to highlight the top risk areas for riders – displayed at key locations on Scotland’s most popular motorcycle routes, to encourage riders to consider their actions before riding.

Jayne Tollan, representative from the Clyde Valley Curvy Riders and Coastal Road Ambassador said: “Safety and best practice are at the heart of the Curvy Riders philosophy and our members are always looking for fresh guidance and advice for getting the most out of Scotland’s roads.”

“We’re delighted to back the Breath-taking Roads campaign and we’re looking forward to offering some top tips and advice from our community.”

The Campaign – What We Think!

We like these videos, not just because of the high production value, although that does get you engaged with videos.

We love the music – and wouldn’t it be great to have a drone to capture our own riding moments!

The underlying message in the videos is something we believe riders will understand and relate too, reminiscent of the DfT THINK! Bike – Perfect Day Video

The video is really self-explanatory, to watch a video that shows riding on a road and engages you to think!

There is no authoritative person speaking, nor or there hard-hitting images and gore which are not necessary or effective. It’s an intelligent video with a simple, clever message, meaning the vast majority of riders will be more likely to take notice of the video.

The website for the videos – Breathtaking roads for Scotland’s bikers – continues that theme with Route Ambassadors – riders themselves from the riding community – giving their experiences and offering advice, there is no big push that riders “must” get further training, with recommendations and detours along the routes.

For us a picture or in this case the videos paint a thousand words.

The videos and the campaign are inviting in inviting riders to ride Scotland’s stunning scenery!