The Biker NI Safety Card is part of the worldwide CRASH Card programme.

The CRASH Card was originally created and designed by the committee of the Ambulance Motorcycle Club – www.ambulancemotorcycleclub.co.uk – a group of experienced Paramedics and ambulance staff who are passionate about motorcycling.

This scheme, which has been in use since March 2009 in some parts of England is available nationally through local road safety partnerships, air ambulances, fire and rescue services, selected commercial outlets and some Police Bikesafe – Ambulance Services across the UK endorse the scheme.

Since 2009 the programme www.crashcard.co.uk has expanded with over 2.5 million of the free “CRASH Cards” in circulation in a similar format in various countries across the world, including: America –  Sweden – Finland – Portugal – Romania – Australia – Norway – Scotland – Wales – England – Northern Ireland – Eire – and a small number in France.

Originally brought to Northern Ireland in 2013 the Biker NI Safety Card the initial run of the “CRASH” card was 5,000 and in 2014 BikeSafe the PSNI motorcycle safety initiative funded a further 5,000 of the cards, our thanks to all those who supported and supplied the card free to riders.

The card has been relaunched in February 2019, proudly sponsored by JMK Solicitors and is again supported by the major agencies involved in keeping us safe on the road: Police Service of Northern Oreland (PSNI) Bikesafe – Northern Ireland Ambulance Service (NIAS) – Northern Ireland Fire & Rescue Service (NIFRS) and the BMF – British Motorcyclists Federation.

This time the card is also supported by Road Racing Ireland – IAM RoadSmart and the Air Ambulance Northern Ireland Charity. 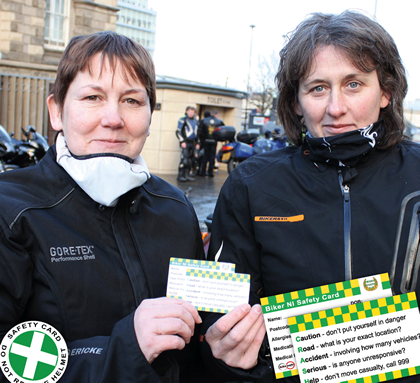 The motorcyclist places a card inside their helmet as a medical alert.

The details which the rider has written on the card provide vital information for attending ambulance crews if the motorcyclist is injured in an road traffic collision. Saving valuable time and helping treatment especially if the rider is either unconscious or unable to communicate.

The card also has a mnemonic “CRASH” (Caution, Road, Accident, Serious and Help) which gives helpful advice if a rider comes across a road traffic collision.

A small sticker is placed on the right hand side of the riders helmet which alerts emergency responders that the card is carried inside the lining of the helmet.

Ian Burrell, General Secretary, of the Ambulance Motorcycle Club at that time commented: “We know that riders are more likely than any other road user to stop at the scene of an accident and offer to help. 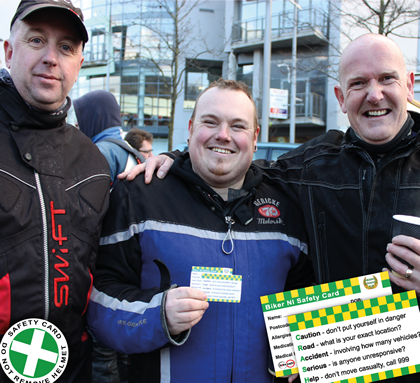 The scheme received an award from the FIM – Fédération Internationale de Motocyclisme, the  FIM Road Safety Award 2012  for the creation of the helmet Crash cards – and the Rider Alert in the US – Medical cards in Sweden, etc… in recognising the outstanding effort and achievement’s of the programmes partners.

UK Paramedic and Secretary General of the UK Ambulance Motorcycle Club, Ian Burrell was rewarded for his services to motorcycle safety in the 2014 British New Years Honors List and made a Member of The British Empire (MBE) by Her Majesty Queen Elizabeth.

In the USA the Richmond Ambulance Authority was awarded the Nicholas Rosecrans Outstanding Achievement Award for Injury Prevention at the prestigious JEMS Conference Awards ceremony and the Virgina state Governors Transportation Safety Award.