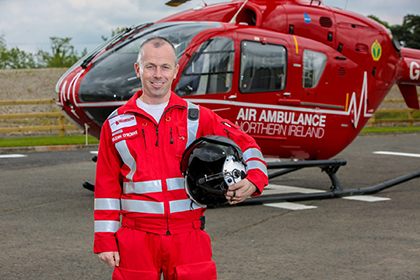 The coveted “UK Paramedic of the Year” title has been awarded to Northern Ireland Ambulance Service Paramedic, Glenn O’Rorke.

Glenn, who lives in Bangor, picked up the award at the Ambulance Leadership Forum Conference in Warwick, on the 18th March 2019.

Nominated by the NIAS Medical Director, Dr Nigel Ruddell, Glenn expressed his surprise at the nomination saying; “I felt very proud and privileged to be nominated as UK Paramedic of the Year. It came as a huge surprise, knowing how many paramedics are out there delivering a gold standard of care – particularly in NIAS.”

Dr Ruddell elaborated on his reasons for nominating Glenn as a Paramedic worthy of the award: “I think Glenn absolutely epitomises all the best qualities of the Paramedic profession. In terms of providing care for patients, he has been uncompromising in his standards. Recently he has worked really hard to develop a team of Paramedics and Doctors who work alongside him on the HEMS service and, in doing so, he has raised standards for the care of serious trauma patients, right across Northern Ireland.” 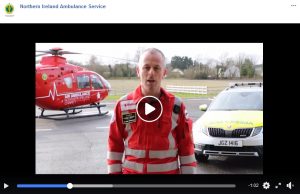 On receiving the award, Glenn, in typically humble fashion, was quick to share the credit, which is particularly fitting following the tragic events of the weekend when NIAS crews responded to three fatal RTCs and the incident at Greenvale Hotel where three young people, tragically, lost their lives; “This award is a reflection of the contribution to patient care of all the teams I have worked with throughout my career – ACA’s, EMTs, Control, Paramedics and more recently the HEMS team in NI.

The ambulance service is a huge family and I pay tribute to each and every one of them and I consider it an honour to work alongside them on a daily basis. I would like to give a special thanks to the Northern Ireland Ambulance Service and Air Ambulance Northern Ireland who have given me the opportunity, and absolute privilege, to do what I love doing – working with, and for, patients”

NIAS Chief Executive, Michael Bloomfield was at the ceremony to see Glen pick up this award and was quick to pay tribute to him, saying: “I congratulate Glenn on this well deserved national award. It is recognition of his exceptional contribution to the establishment and delivery of the HEMS service and also reflects the high standard of care provided by everyone, every day in the Northern Ireland Ambulance Service.”