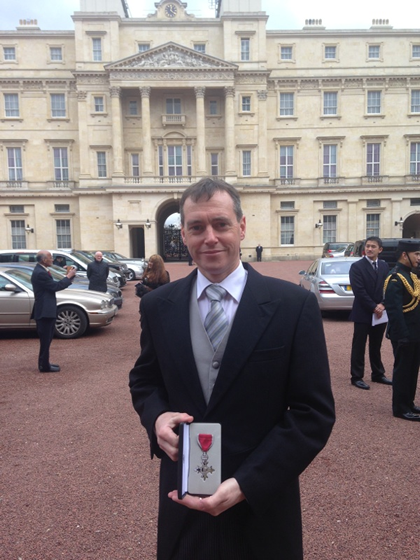 Motorcycle Safety Gets a Royal Seal of Approval

UK Paramedic and Secretary General of the UK Ambulance Motorcycle Club, Ian Burrell was rewarded for his services to motorcycle safety in the British New Years Honors List.

Ian, the founder of the CRASH card helmet safety program, adopted in the USA as Rider Alert, was made a Member of The British Empire (MBE) by Her Majesty Queen Elizabeth.

The CRASH card program places a card inside a Riders helmet to identify the unconscious rider in the event of (and in Ian’s own words) ‘an unscheduled dismount’. The program was followed in the US with Rider Alert, Sweden with its ‘Medical Card’ and is also present in Northern Ireland, Portugal, Romania and Finland.

Rob Lawrence, COO of the Richmond Ambulance Authority and head of the Rider Alert program in the US was one of the first to congratulate Ian. “To receive this level of recognition and ultimately royal approval is well deserved and I know that Ian is delighted not only for himself but for the great things all the now global safety programs have achieved.”

The worldwide helmet safety collaborative is now nearing its one millionth card produced and as well as winning many awards in Europe and the US for the program has also assisted in the treatment of riders at the scenes of accidents by identifying them, their contact details and any medical history they may have.

General Secretary of the Swedish Motorcycle Club and also board member of the world wide Federation of International Motorcyclists (FIM), Jesper Christensen said : “We are very proud of Ian’s achievement, the FIM also rewarded the program with its Global Road Safety Prize in 2012″ . Christensen also added – ‘As an additional present to Ian, the FIM will start to offer CRASH / Rider Alert cards to their global network of 108 motorcycle federations in 2014”

At Biker NI Safety Card we congratulate Ian on this well deserved reward for his services for motorcycle safety and his personal touch in his help to get the “CRASH CARDS” into Northern Ireland.

Ian will shortly receive his formal invite to Buckingham Palace to receive his award from Her Majesty.