The Biker NI Safety – CRASH CARD –will be at this weekend’s Adelaide Blackhorse Motorcycle Festival, to be held over the next three days in the New King’s Hall Pavilion – Balmoral – Belfast.

The CRASH Card was originally designed by paramedics through the Ambulance Motorcycle Club.

The card is supported by the major agencies involved in keeping us safe on the road:

Trevor Baird from Right To Ride, (who distributes the cards in Northern Ireland through the motorcycle safety initiative Ride It Ride) comments, “The emergency services and their personnel are at the forefront of dealing with collisions on our roads, from the minor to the major ones. If the card helps them to medically deal with these and subsequently helps riders, then we hope that both riders and pillions take the card to their hearts and carry them close to their heads.”

He adds, “Thanks this year must go Bill Holden and the PSNI Bikesafe initiative for providing extra funding which has enabled us to be in the position to distribute further 5,000 of the CRASH CARDS.”

So what is the CRASH CARD? 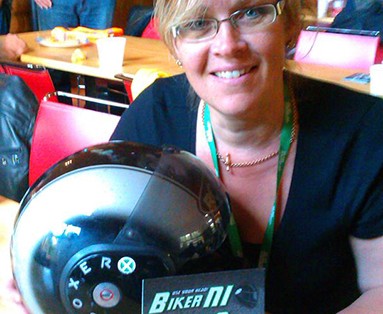 To let those attending know about this vital information the rider places a sticker on the outside of the helmet, on the right hand side (NOT on the visor or other attachments), indicating that a rider or pillion is carrying a safety card inside the lining of their helmet.

The wording on the sticker is aimed at anybody who may, in an attempt to help at the scene of a road traffic collision try to force a helmet off a rider’s head, keeping the helmet in place until emergency responders assess the situation.

However the “job” of the card does not stop there, one side of the card has the memory aid CRASH, which is intended to be a set of easy to remember steps if you are the one making the 999 call and follows a similar set of questions universally used by ambulance service control centres, and focuses on safety, the location of the accident, and how serious it is.

Ian Burrell founder of the CRASH card helmet safety program, recently awarded an MBE says, “The simplicity of the programme is its strength we are still amazed that thousands of motorcyclists a month choose to take a card and help themselves and others in potentially their hour of greatest need.” 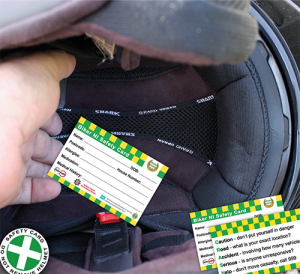 The card is also available in US with Rider Alert, Sweden with its ‘Medical Card’, Portugal, Romania and Finland, we are proud to be part of this CRASH CARD family in Northern Ireland..

If you are at the festival, come along and find us there, or you can get a card at the Bikesafe stand or from MotoTech – www.moto-tech.biz on stand 33.

If you are not coming along to the festival, you can find out where to get a card on the Biker NI Safety Card website – Get A Card – www.bikernisafetycard.org