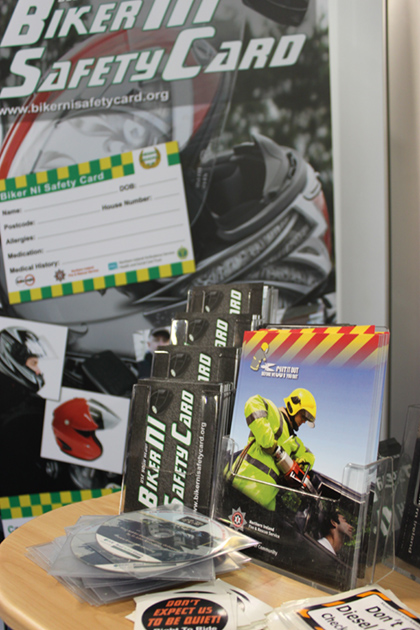 After three days with our Northern Ireland Biker Safety Card at the Adelaide – Blackhorse Motorcycle Festival in Belfast, news has reached us that one million of the cards have now been produced and distributed worldwide.

The card was well received at the festival by those we talked to about its purpose, which is to improve treatment pre hospital in the unfortunate event of a road traffic collision or other injury. Infact people came looking for the stand at the show – from individual riders, clubs, trainers and businesses.

With thanks to the PSNI – Bikesafe we have been able to produce an extra 5,000 cards, this brings the number of cards being distributed in Northern Ireland to 10,000. Our delight is to see a rider with the “Do Not Remove Helmet” Sticker on their helmet and knowing that they are carrying the card in the lining of the helmet.

With the 1,000,000th CRASH Card now distributed, more will be available to motorcyclists this weekend at the London Motorcycle Show in the Docklands – www.mcnmotorcycleshow.com

This high number of free medical alerts and motorcycle rider advice Cards was achieved by the integrated workings of groups in England, Wales, Scotland, Northern Ireland, The Isle of Man, Sweden, Finland, Romania, Portugal and the USA.

“There is no doubt that CRASH Card and its many international cousins have assisted riders in their hour of need” said Ian Burrell MBE Ambulance Motorcycle Club General Secretary and founder of the programme. “We have been privileged to work alongside many brilliant organisations like Ride It Right who have adopted the programme and continue to produce and distribute free cards to riders.”

International organisations like the FIM have endorsed the programme and will continue the great work by introducing the card to a further 108 countries starting this year. 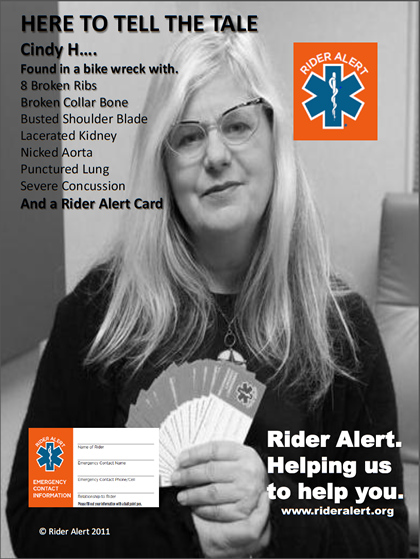 COO of the Richmond Ambulance Authority Rob Lawrence travelled to Washington DC at the Weekend to collect the 2014 Nicholas Rosecrans Outstanding Achievement Award for Injury Prevention at the prestigious JEMS Conference Awards ceremony.

The award which recognises those organisations who have contributed to public safety is highly coveted in the USA. RAA receives the award for its Rider Alert, Crossing Alert and CPR programmes.

Rob the USA lead for Rider Alert and an influential figure in the global improvement in Motorcycle rider safety commented, ”Honoured to accept the award on behalf of what has been a huge team effort in Washington DC today at the JEMS Conference. Well done and thank you to Team RAA, it took and takes everyone to do what we do“.

On Wednesday 12th February Ian Burrell the pioneering Paramedic who created the CRASH Card will receive an MBE in an investiture at Buckingham Palace. 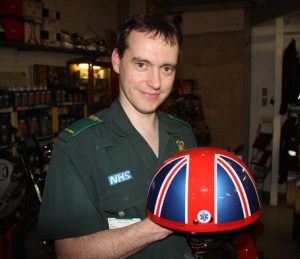 The CRASH card program places a card inside a rider’s helmet to identify the unconscious rider in the event of (and in Ian’s own words), “an unscheduled dismount.”

The program was followed in the U.S. with Rider Alert, Sweden with its “Medical Card,”and is also present in Northern Ireland, Portugal, Romania and Finland.

Rob Lawrence, COO of the Richmond Ambulance Authority and head of the Rider Alert program in the U.S., was one of the first to congratulate Ian: “To receive this level of recognition and ultimately royal approval is well deserved, and I know that Ian is delighted not only for himself, but for the great things all the now global safety programs have achieved.”

As well as winning many awards in Europe and the U.S. for the programme, it has also assisted in the treatment of riders at the scenes of accidents by identifying them, their contact details and any medical history they may have.