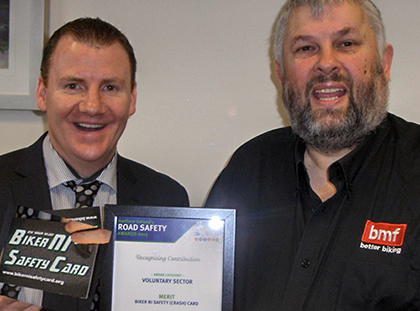 Fantastic news for all those involved in bringing to and supporting the Ambulance Motorcycle Club Crash Cards in Northern Ireland.

The Biker NI Safety (CRASH) Cards are now being looked after by the BMF (British Motorcyclists Federation) further details on how to get a card are available on the CRASH Card website – www.bikernisafetycard.org

Howard Anderson, Chairman of BMF Region 10, Northern Ireland, received the Northern Ireland Road Safety Award 2015 on behalf of the BMF and our friends at Right to Ride for the Biker NI (crash) card.

The award was presented by Mr Tony McKeown the Marketing Director of Crash Services.

The cards are being distributed by Howard in Northern Ireland and backed by Right to Ride, the BMF, the IAM, First Aid for Riders, Adelaide Insurance Services and Learn2Ride Motorcycle Training.

To let those attending know about this vital information the rider places a sticker on the outside of the helmet, on the right hand side, indicating that a rider or pillion is carrying a safety card inside the lining of their helmet.

Our thanks to Howard for the acknowledgement and kind words in the latest edition of the BMF members Rider magazine.

Based on the article and comments on the BMF Facebook page we are certain that Howard and his colleagues at the BMF will move the Ride It Right project of the Biker NI Safety CRASH Cards forward for the benefit of all motorcyclists.