The campaign will initially see one million free stickers distributed to drivers as a reminder to do a ‘double-take’ in their mirrors for cycles and motorcycles in their blind spots. It is proposed that the cycle sticker is placed on the passenger’s side and the motorcycle one on the driver’s side.

Free stickers can be picked up from all Halfords outlets and will also be distributed by the police and directly to AA breakdown members in renewal and joining packs.

For motorcycling the campaign is supported by John McGuinness, 20-time Isle of Man TT winner, who said: “As a professional motorcycle racer, I definitely feel safer riding my bike on the track than I do on the open road. On the race track or at organised road racing events, you are riding alongside people who are acutely aware of their surroundings and the presence of other bikes. In the real world however, this is not always the case as too many drivers simply don’t ‘see’ bikes and this can create a dangerous situation. The AA Think Bikes stickers serve to remind drivers to use their mirrors and be more aware of bikers on the roads.” 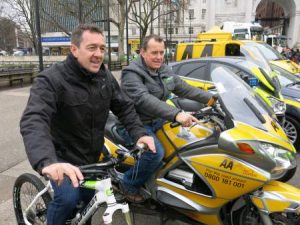 Chris Boardman, British Cycling’s policy adviser, said of the campaign, “This sticker campaign reflects the importance of looking out for everyone on the road, regardless of what form of transport they use. “Looking left and giving way to cyclists is a crucial part of improving safety on the roads. This is what happens on the continent and it should become part of our culture too. Of course, this rule is already written into the Highway Code – we just need to ensure that people are following it.”

The campaign also has the support of the Transport Secretary Road Safety Minister, Department for Transport (DfT in GB), Police, Mayor of London Boris Johnson and a host of cycling and freight groups.

What is the purpose of this campaign?

The AA say the results of an AA-Populus poll of 17,629 drivers and a  previous AA-Populus poll show that 85 per cent of drivers think motorcyclists are sometimes hard to see and more than half (57%) are often ‘surprised when a motorcycle appears from nowhere’.

The original sticker concept came from Tony Rich, AA Patrol of the Year, after his friend, Jack Bellis, was killed in a motorcycle crash. Tony and Jack’s family wanted to do something to help prevent such crashes in the future.

Think Bikes! is part of the AA’s ongoing commitment to improve road safety for all road users and forms part of its ‘New Deal’ for road users the organisation is championing; where all road users agree to stick to the rules of the road and treat each other with respect.

Road Safety is Road Safety no matter what road it is on, but is the campaign here in Northern Ireland?

Biker NI Safety Card supports the campaign, because in our view, every little helps, sometimes a simple idea, whether new or reiterated.

Although that difference can be hard to monitor to determine its success, reminding people of what they should already be doing may make a difference even when a naked cyclist rides past as shown in the video for the campaign – our eyes are still watering!