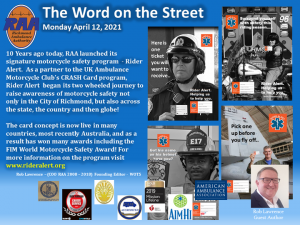 United States – Congratulations to the Rider Alert motorcycle-safety program which was launched in Richmond, Virginia, on April 12, 2011 – ten years ago.

The signature motorcycle safety programme – Rider Alert – is a partner to the UK Ambulance Motorcycle Club’s CRASH Card programme, the same as our own Biker NI Safety Card originally launched eight years ago.

This Rider Alert program was started by the Richmond Ambulance Authority and Bon Secours Virginia Health System in partnership with Motorcycle Virginia! and was the first of its kind in the United States.

Rider Alert has expanded across the US, with New York being the second state to launch the program. The Virginia Rider Alert Team also assisted organizations from Delaware, Texas and Kentucky in developing the program.

The card concept is now live in many countries, most recently Australia and Rumania and as a result has won many awards including the FIM World Motorcycle Safety Award.

In Northern Ireland the card received a Road Safety Award – in association with CRASH Services – www.crashservices.com – the award recognised the contribution of individuals and organisations who have worked to improve road safety in their communities.

Rider Alert with the continued support of the original sponsors has produced a total of 70,000 of the Rider Alert Cards.