The rider safety initiative “Crash Card” has been launch in the Australian state of New South Wales – NSW – to deliver the CRASH Card scheme, free to motorcycle riders across New South Wales.

Hornsby Shire Council’s Traffic & Road Safety team they have joined forces with NSW Ambulance, NSW Police Force and Fire & Rescue NSW to adopt the CRASH Card scheme, which has been successfully implemented around the world, due to the higher than average number of incidents involving motorcyclists in the local area.

After NSW Ambulance came on board it made sense to roll the scheme out across the state as riders travel great distances in their quest for adventure on the road.

At some point in a motorcycle rider’s life they may have an ‘unscheduled dismount’ or may be travelling with a rider who does. The CRASH Card is a two-sided card with the mnemonic CRASH, which follows a similar set of questions used by ambulance service control centres, and focuses on safety, the location of the collision, and how serious it is. The other side includes space to record information which could be vital to the attending paramedic, including current medical history and the details of any medication currently being taken. 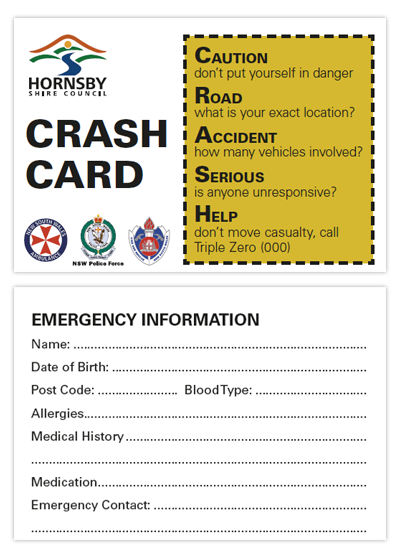 Importantly there is also space to list the name and contact telephone number of a next of kin. It is common for rider’s phones to be locked or damaged following an incident. Many phones nowadays require a pin code to access information, which means personal information cannot be retrieved if the rider is unresponsive or badly injured.

The card is placed in the lining of the rider’s crash helmet. A self-adhesive red dot sticker is supplied, which the motorcyclist attaches to the right hand side of the visor / helmet. The sticker is the prompt for the attending emergency service to look for the card, or to tell the paramedic that a card is present.

The information supplied with the card reinforces the importance of the correct removal of helmets, and that only trained personnel should attempt to remove it.

The CRASH Card scheme originated in the United Kingdom when Ian Burrell a paramedic and keen motorcycle rider came up with the idea. Through the Ambulance Motorcycle Club (UK) – of which Ian is General Secretary – a design was created and rolled out across the UK in March 2009.

NSW Ambulance supports the introduction of this initiative, which has proven extremely effective in the United Kingdom.

Acting Deputy Director Metropolitan Operations North, Jason Stone said, “I have no doubt that this card will greatly assist paramedics when assessing patients at the scene of a motorcycle collision. As the card will provide paramedics with vital medical information about the patient while treating”.

The NSW Police Force is also on board with the implementation of the CRASH Card, with Chief Inspector Phillip Brooks voicing his support.

“This is a very important initiative in ensuring the overall safety of the Motorcycle riding community, particularly in the event of a crash. I encourage riders to take advantage of this important opportunity, that will greatly assist emergency services,” he said.

The Crash Card is available to all motorcyclists throughout the United Kingdom, Sweden, Finland, Portugal, Romania and Northern Ireland. The concept – also known as “Rider Alert” is now available in the United States.