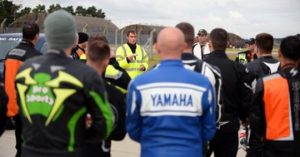 Globally 1.25 million CRASH cards in the UK – including Northern Ireland, Europe and USA as RAF Lakenheath has become the first US Air Force (USAF) base in the UK to join the award winning CRASH card programme.

RAF Lakenheath has become the first US Air Force (USAF) base in the UK to join the award winning CRASH card programme.

CRASH cards were launched by the Club in Essex in 2009.

They are placed in the motorcyclist’s helmet containing medical and personal details so that emergency services and others can act in the best interests of a casualty.

One side of the card carries the mnemonic CRASH for helpful hints which will assist the 999 call taker if a rider has come off but is not seriously injured or happens across an accident and is using the card as a prompt.

The other side gives riders space to write their name, date of birth and medication, so when an ambulance crew arrives at the scene of an accident they will identify an unconscious or seriously ill rider has a card in their helmet by a small green dot placed at the side of the visor on their helmet.

Ian praised the high speed cornering event which allowed USAF personnel the chance to enhance their riding skills. He said: “As a paramedic I know that less than 1% of accidents are caused by a vehicle fault, enhancing training and skills is a vital part of helping to reduce the number of motorcyclists injured on the regions roads.”

“I was happy to have the CRASH Cards introduced to us during our training event. Our riders quickly accepted the cards, so I’d like to thank Ian for connecting us to the program. We have more than 600 riders between RAF Mildenhall and RAF Lakenheath, so I think these cards are very important and can help save a life”

The CRASH card scheme has been very successful, both in the UK and in the USA where it known as Rider Alert. In six months the Richmond Ambulance Authority, a leading ambulance service in America, has distributed 125,000 Rider Alert cards.

In the UK since the scheme’s initial launch in 2009 more than 360,000 CRASH Cards have been produced. Motorcycle injuries have been reduced by more than £6m in that time in the east of London and Essex.

Only experienced trained personnel should ever remove a helmet following an accident.