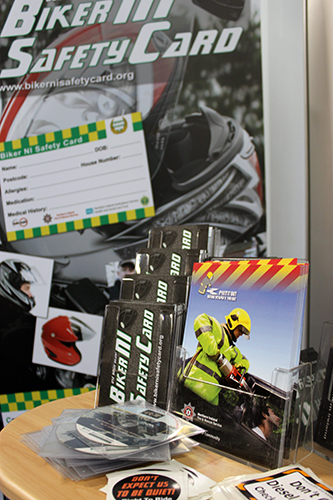 We had a fantastic time distributing Biker NI Safety Cards at the Adelaide Motorcycle Festival (Adelaide Insurance Services) at the week end and as we relax our weary feet we can reflect on the three days hard slog.

Our thanks to Billy Nutt, show organiser and seller of travel deals at Nutt Travel for squeezing us in at the last moment.

Our little spot proved to be in an excellent position, opposite Charles Hursts BMW Motorrad and just around the corner from MotoTech Service & Performance Centre stand both who have agreed to supply cards, which are free, to customers.

BikeSafe, who are on board with the initiative, managed to shift their stock of over three hundred cards and took away a further pile which will be available at their BikeSafe days in 2013.

Northern Ireland Fire & Rescue Service (NIFRS) spokesperson said, “This has the potential to be a lifesaving initiative.

Our Firefighters witness first hand the carnage on our roads and the lives that are completely destroyed as a result.

The information contained on the safety card will go a long way to ensuring the casualty receives the most appropriate treatment at the earliest opportunity and we would encourage all bikers and their pillions to carry the card.”

Howard Anderson from the British Motorcyclists Federation (BMF) supporting the cards in Northern Ireland, came along to the stand (and as anybody who knows Howard), he spent more than just five minutes chatting about the card and riders issues from here in Northern Ireland the UK and Europe.

Another opportunity the show gave us was to talk to other dealers at the show and as a result, the cards will be appearing in the next week or so at various selected dealers across the province. 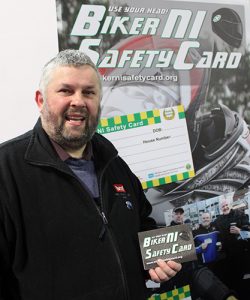 We will be listing them all on the Biker NI Safety Card Website.

A pile of the cards will be winging their way to the DVA (Driver & Vehicle Agency) for riders taking their test at driving test centres.

However our attendance at the show and the main purpose of being there was to explain and hand out the cards to motorcyclists, a captive audience at the Kings Hall Pavilion, with a patter that became highly refined by the end of the show.

We were able to give out over a thousand cards to riders including the: 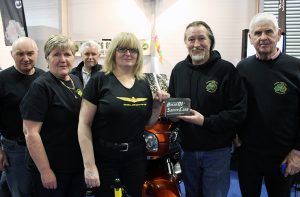 all getting cards and visits to the stand from the:

and possibly a few more we have probably forgotten.

More cards are on their way to the Quay Vipers MCC

Find out more about the card and where to “Get A Card” at www.bikernisafetycard.org