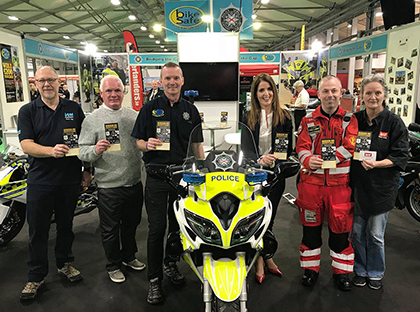 A safety initiative for motorcyclists has been re-launched in Northern Ireland during the NI Motorcycle Festival at the Eikon Exhibition Centre in Lisburn.

Called Biker NI Safety Cards, the free cards are intended to help protect motorcyclists in the event of a road traffic collision.

Motorcycle users can record vital personal details such as their medical history on the card. It is then inserted inside a helmet to be used by medical professionals as a reference in the event of an emergency.

A detachable sticker that states “Do not remove helmet” also alerts responders at the scene of a crash and reminds them not to force off the rider’s helmet until paramedics arrive.

Managing Director of JMK Solicitors Maurece Hutchinson said: “When approached by Howard Anderson from the British Motorcyclists Federation to help get the cards back into circulation, we were only too glad to get involved. We would encourage all motorcyclists to pick up a card and apply the sticker from the card to their helmet and carry the card at all times.” 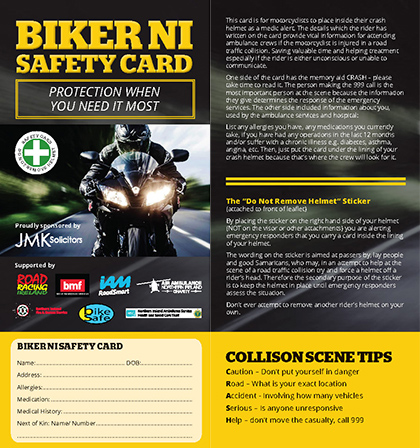 To let those attending know about this vital information the rider places a sticker on the outside of the helmet, on the right hand side, (NOT on the visor or other attachments) indicating that a rider or pillion is carrying a safety card inside the lining of their helmet.

Already over 2.5 million Cards are in use and available in America –  Sweden – Finland – Portugal – Romania – Australia – Norway – Scotland – Wales – England – Northern Ireland – Eire – and a small number in France.